No Freedom Without Sacrifice 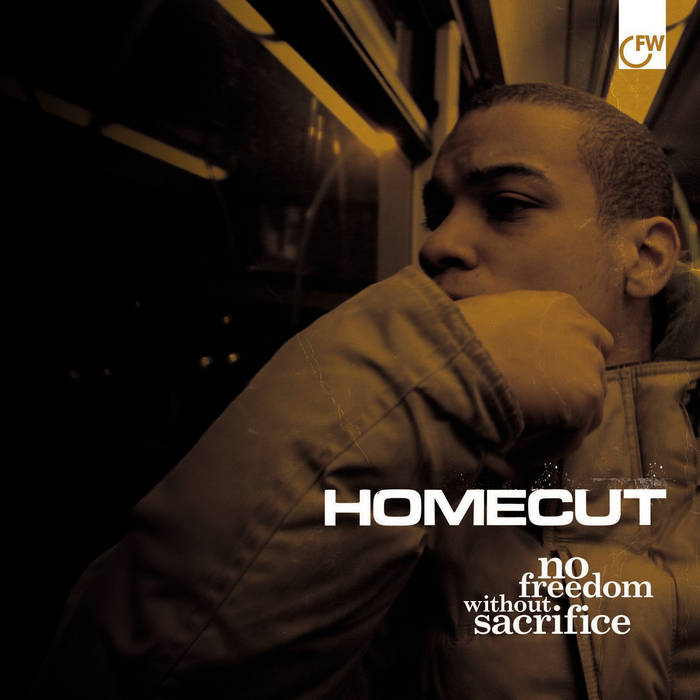 Homecut is the creative alter-ego of Testament, an emcee, musician and producer who has been a key part of the British / Northern music scene for the last 10 years. You may have seen him hosting two of the UK's biggest nights: New Bohemia and The Tuesday Club. Or maybe it's from his role in Shlomo's Vocal Orchestra, or perhaps you saw him beatboxing with Ray Parker Junior on TV. Or meeting Desmond Tutu. Or fronting the kidkanevil live show. Or performing live with some of the UK's finest ' Jehst, Steve Brown (Cinematic Orchestra), Quantic, The Haggis Horns, Mark Ronson, Andreya Triana, Jarvis Cocker and Klashnekoff (to name but a few). If you haven't come across Homecut, take a listen to these tracks and get to know a man who's as equally influenced by Kurt Vonnegut or The Rockford Files as he is by Public Enemy. This is an album with too many highlights to mention ' from the futuristic soul of 'Participant' to the highlife hip hop of 'Harmony', it's a record bursting with invention, ideas and real music. 'No Freedom Without Sacrifise' is the essence of a real music scene, with real people and real songwriting. With a lyrical breadth that takes in Persian tea houses, Apartheid, sex lines, Shepherd's Pie and the paintings of Lowry this is no ordinary album. It features an A list guest list including Soweto Kinch (Mercury Music Prize nominee), Corinne Bailey Rae (Grammy Winner), J-Live (Rawkus / BBE), Andreya Triana (Flying Lotus / Bonobo), John Ellis (Cinematic Orchestra), kidkanevil (Stateless) and Ty (Mercury Music Prize Nominee).

"I really love this" The Nextmen
“Inspired” iDJ Magazine
“Unique & refreshing” Hip Hop Connection
"The laidback cool of Guru, the boundary-pushing of Roots Manuva and the conscious lyricism of Common” YEP
"5 Stars - album of the week" Metro

Homecut is the brainchild of MC/producer Testament. Conscious lyricism, live instrumentation and mix of Soul, Hip-Hop and sonic experimentation mark out Homecut on the UK landscape. The critically acclaimed debut album “NO FREEDOM WITHOUT SACRIFICE” features collaborations with Corinne Bailey Rae, Soweto Kinch, US rap legend J-Live, Andreya Triana and members of the Cinematic Orchesta. ... more

Bandcamp Daily  your guide to the world of Bandcamp